skip to main | skip to sidebar

EATING MY WAY THROUGH INDIA

The latest Outlook magazine has a whole feature on food and foodies in India. But they are not talking about the usual suspects in Delhi, Bangalore or Chennai. The whole feature is about food specialities in 'mofussil' (rural, far away) areas. Its is well written feature and they really try to capture the essence of eating and living in small town India. If you have time do give it a dekko.

It also raises an interesting point - 'Bharat' is as fascinating to 'India' as it is to foreign tourists. Even a casual reader of Indian news or views will tell you that this distinction between the urban, upwardly mobile, globalized, as-comfortable-with-basil-as-with-coriander India ('India') and the rural/small town, benefiting-but-not-much-from-economic-reforms, basil-worshiping India (called 'Bharat') has been in the news quite a bit over the past few years.

There has been a recent resurgence of curiosity about and respect for regional cuisine and lifestyles. In the early 1990s there was a renewal of interest in handicrafts and hand looms and that has continued and in fact, has been incorporated into high fashion as well. People like me who studied in Delhi University or JNU in the late 1990s will remember the khadi or hand loom kurta's, kolhapuri chappals and jhhola's that were the mark of a true intellectual, a symbol of empathy for those worse off than us as well as a symbol of their empowerment through the use of traditional arts.

But in this century, as economic reforms have started fructifying into massive economic gains the movement is about more than clothes. It is about awareness that a train ride away lies a land that may as well be foreign to you. It is about awareness that ignoring either India or Bharat can have electoral consequences (the last general elections were lost by the incumbent BJP and one of the reasons that is propounded is that the party did not pay as much attention to Bharat as it did to its traditional, middle class constituency in urban India). It is about awareness that the massive economic gains are leading to a fast, permanent shift in Indian society. The extent of social and geographic mobility has increased ten-fold just in the past 10 years. Places like Pune, Bangalore, Gurgaon are the new melting pots and it doesnt matter whether you are from the posh GK-II locality in Delhi or from Balia district in UP. But the fact that GK-II and Balia is squished together in space-starved cities means greater curiousity about what Balia has to offer the world.

As I undertook my own bi-annual tour of 'mofussil' places this winter, I could not but help think about how important and relevant this movement is right now. I hope that it is not just a fad that will pass away. I hope that we (India or Bharat) continue to be curious about each other and respect each other. And yes, here I do presume that the distinction holds. You may have your own views about this and I would love to hear them.

So what have I been up to the past few weeks? Eating my way through India and Bharat alike! Here are some of my FAVOURITE things ever to eat ordered by the time I took their pictures. 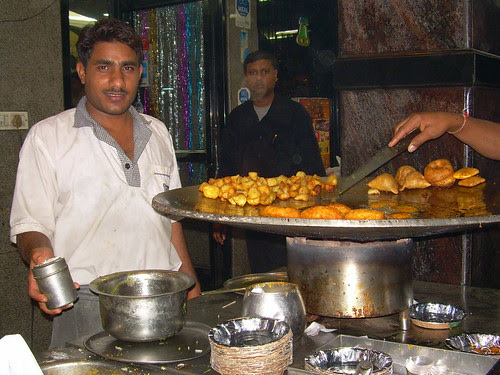 Favourite 1: Bengali Sweet Shop (South Extension Market) Chaat 'Bhaiyya' (brother). This guy makes the best roasted potato chaat as well as tikki's ever. And the 'gol gappas' (little balls full of spicy water) are as tasty as ever (despite using bottled water and gloves :)). My most-favorite chaat shop used to be in Khan Market but unfortunately, it closed last year since Khan market is getting “too cool” to have a sweet shop! Much as I like upmarket coffee shops and Italian bistros, they do not have chaat!!! 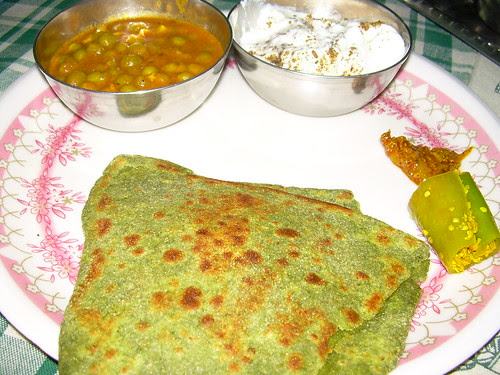 Favourite 2: Simple home-made lunch of potato-pea curry, dahi vada (lentil dumplings in yogurt), home-made green chilie pickle and 'Bathua' paranthas. Bathua is a green that is quite nutty in taste and really comes out well in paranthas as well as in raitas. Clean the leaves in cold water and then blanch in boiling water for 3-4 minutes. Grind to a paste. For parantha's, incorporate this into the flour while making the dough. For raita: cool the paste and mix in yogurt. Sprinkle salt and ground, roasted cumin seeds. 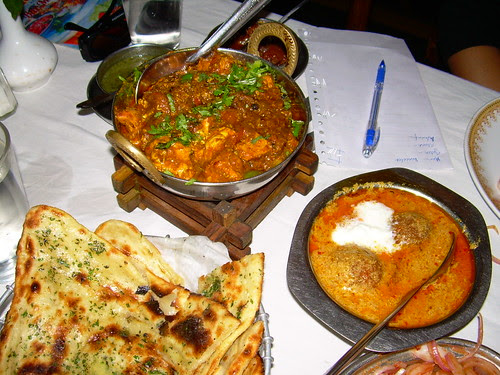 Favorite 3: Mughlai food the way it is supposed to be at Minar resturant, Outer circle, Connaught place. Clockwise: pudina naan, chicken kadai (for best friend Malini) and Malai Kofta for me! And of course the mandatory pickled onions and papads. Reasonable (by Delhi standards) prices and really good food.

Now we proceed to Jaipur. Here is Bai making a delicious stew for me. She and my grand-aunt thought and thought and thought about what to make for me that I had not tasted. And they came upon this really traditional Rajasthani stew called 'Rabdi'. It was delish! It is a variation of the traditional 'Kadhi' made out of chickpea flour. Here instead they use 'bajra' flour. It is made into a paste with water. Then it is incorporated into buttermilk and cooked for hours on a low flame with constant stirring! It tasted perfect for a winter night. Plus all those wonderful minerals in bajra. Kudos to Bai and grand-aunt. 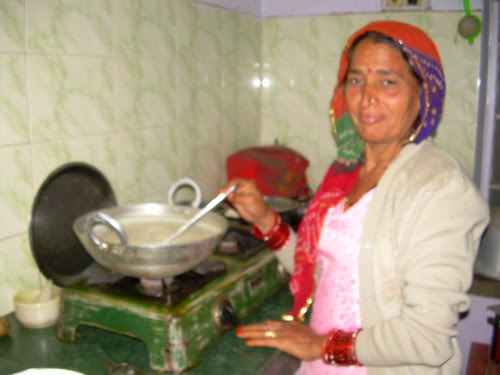 New favorite: Bai in Jaipur making 'rabdi' for me!

But of course, that was not the evening meal! There was a proper dinner to be had which included my MOST favorite green chili dish ever (which is saying a lot since I love chiles in every form known to man). And also, the dish that has been my Waterloo for years. No matter how hard I try, no matter how many times I try, no matter how many tricks I use I can never get my 'Besan Mirch' to have the right taste and consistency. But hope is still alive...........maybe one day mine will taste and look just like my grand-aunt's did. 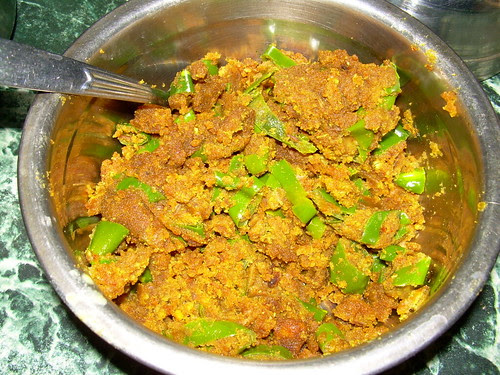 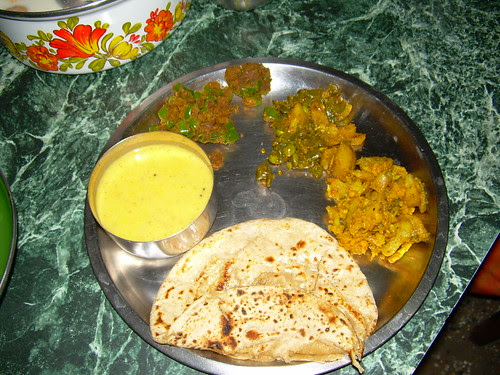 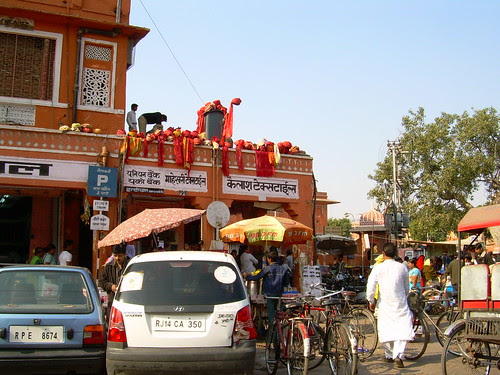 Non-food! Picture from the busiest market in Jaipur. Hustle bustle, color, rickshaws and traditional turbans (look at the red things above the shop). These turbans called 'saafaa' are worn by men and are made of meters and meters of beautiful, tie-dye cloth.

And now Ajmer – my mom's home town. My grandparents are no more yet the house and the place has so many memories of them and all the fun that we used to have their as kids. A large part of those memories involve food (my grandmother was an awesome cook)-- eating it, cooking it, shopping for it. My grandfather was a food enthusiast and a botanist to boot! So it was really informative going veggie shopping with him. Going there now is a treat because we get reminded of my grandfather and the vegetable sellers remember him and us! Like Bai in the picture below......she allowed me to take a picture because she had seen me since I was a kid.....and only on the condition that I print it out and bring it for her the next time I came! Also, 'Bai' means lady and is used to refer to women respectfully. 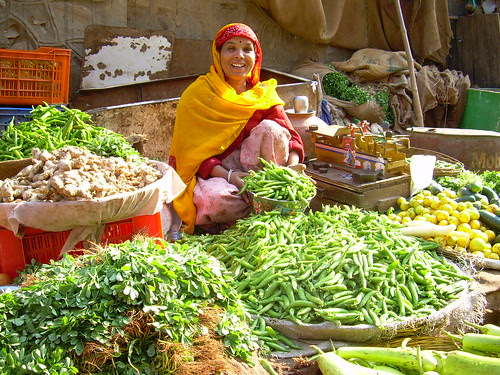 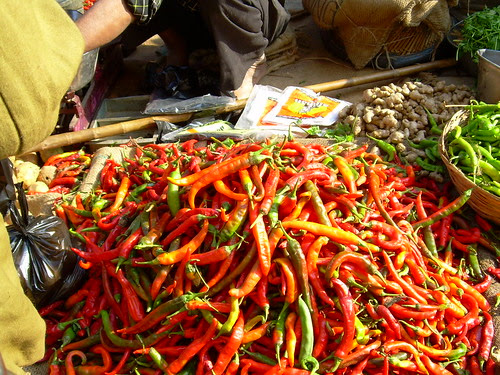 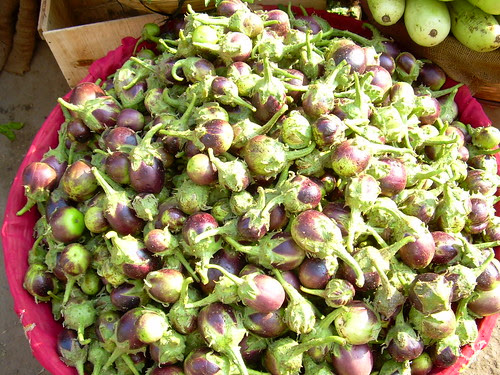 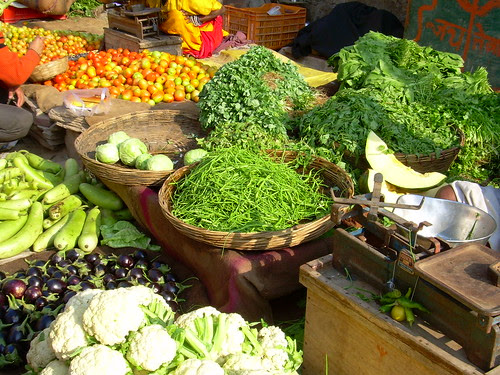 Absolute favorite! The basket right in the middle (next to the scale) is an awesome kind of bean thingie called 'Mogri'. Its basically wild radish greens. Its chopped up and sauted in oil-cumin with potatoes with a sprinkle of powders. 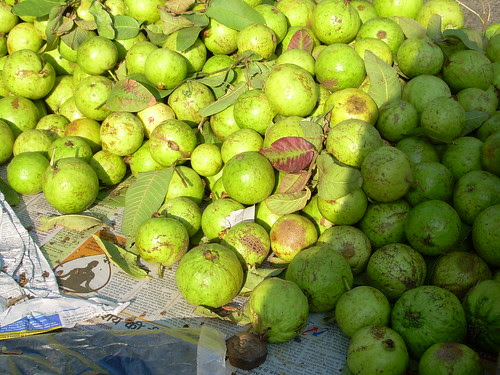 And now I will let you into the secret ingredients in my cooking. Yes, yes...its the Indian spices that you know all about. Just their source is Prithvi Masala Store, Gol Market Ajmer. I always take spices from here and almost never need to buy them from the Indian stores in the US. 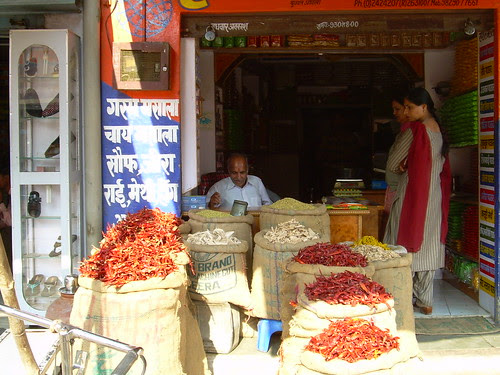 For me, its like a treasure trove. Everything is fresh and he will grind, pack and seal in front of you so that you know that you are getting the real stuff. 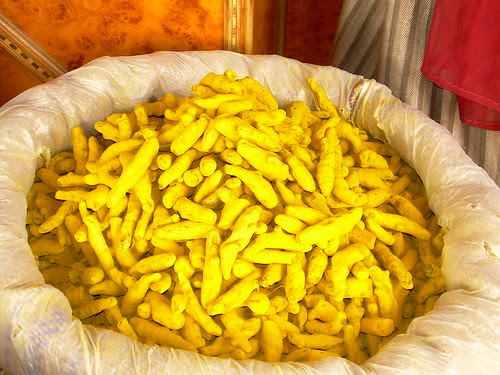 Favorite and healthy: Fresh, unground turmeric. That is the real color, no digital tricks. 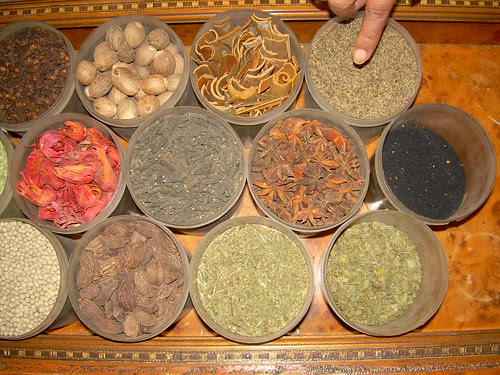 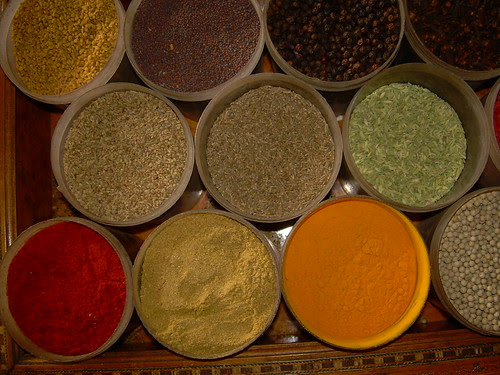 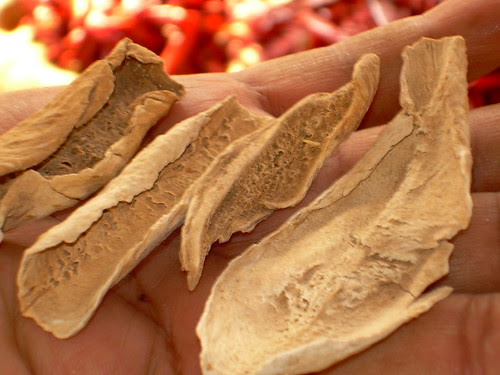 Fresh, Dried Mango before being ground into 'amchur'. 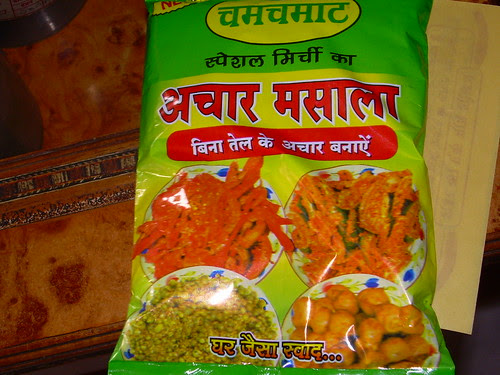 Pickle Masala all mixed and ready to go. Am planning to try this when I get back.

Back in Delhi, it was time for new years. And a north indian favorite was our first major meal of the year. 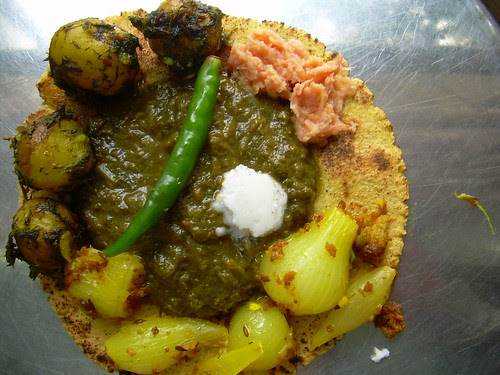 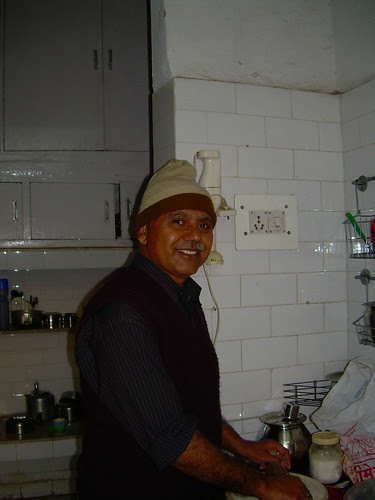 Favorite: Laxman in Kitchen making makka rotis.
He has been with us since I was born and pretty much brought up my brother and I. We used to spend so much time with him that both our tastes in food are more like his- totally Rajputi, Rajasthani, super-spicy, very onion-y, garlic-y – rather than like my parents ( very little spices, onion, garlic). In the next post, we will talk about my most, absolute, super favorite thing that he makes......Yes, I am repeating myself but there are only so many adjectives!

Next stop on this journey is going to be Ujjaini – the holy city of the Malwa region. Also, this coming weekend we have a huge (50-60 people) party at home. And since it is 'Makkar Sakranti' / 'Pongal' on Sunday, Mom will be making a traditional favorite – Bajre ki Khichdi with Kadhi. More on that closer to Sunday!

What a great post! I was raised in a relatively small town (Kolhapur) so I can say that I am "bharatiya" rather than "Indian". Lovely pictures!

Why, thanks Nupur! I do feel that it is an important issue. And if food can break down any barriers, wonderful!

I hope you are having a great time settling down in St. Louis. And congrats about the thesis! its a great feeling being done and over, isnt it?

Gosh! What an amazing post. Very well written accompanied by great pictures.
You are right about the changes in India, and how important it is that we don't lose touch with each other.
As a Southie that lived in Delhi for some time, the profusion of vegetables at the weekly bazaars is something I dearly miss. Also all that food you showed.

Oh my !!! What a fantabulous post. Well written with well-shot photographss. You brought me so close to India as close as 1 feet. Thank you so much for the few minutes of bliss !!!

Wonderful post. It's very fun getting to see all these things for someone who has never been to India. The spices!! I'm envious.

thank u
i am vipul agarwal from vipul spices(prithvi masale) and thank u from my whole heart that u had added our photos to internet.